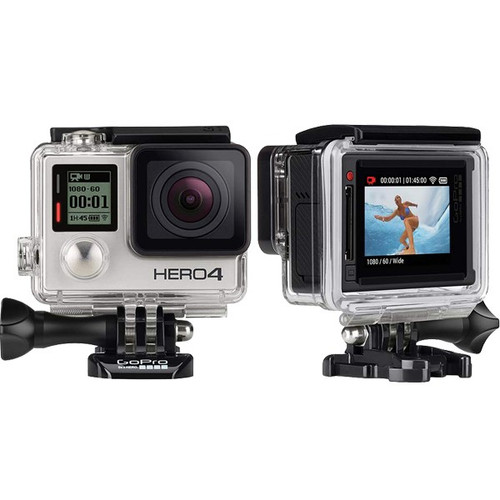 Capture your world in an all-new way with GoPro HERO4 Silver, the first-ever GoPro to feature a built-in touch display. Controlling the camera, framing shots and playing back content is now ultra convenient—just view, tap and swipe the screen. HERO4 Silver captures 1080p60 and 720p120 video with lifelike clarity, plus 12MP photos at a staggering 30 frames per second. New experience-enhancing features include HiLight Tag, which lets you mark key moments for easy playback, editing and sharing, and QuikCapture, which allows you to power on the camera and start recording with the press of a single button. Waterproof to 131’ (40m), HERO4 Silver combines versatility and pro-quality capture with the convenience of a touch display. Pro-quality capture. Touch-display convenience.

GPro HERO4 Silver features built-in Wi-Fi and Bluetooth®, allowing you to connect to the GoPro App, Smart Remote1 and more. The GoPro App transforms your phone or tablet into a live video remote for your camera, offering full control of all functions and settings, easy shot preview and playback, plus sharing via text, email, Facebook and more. The Smart Remote allows you to control multiple GoPro cameras from distances of up to 600’ (180m). Control, view and share with built-in Wi-Fi + Bluetooth. 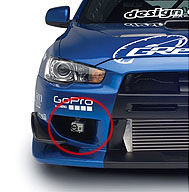 Learn about the new GoPro HD HERO® camera at http://gopro.com. The best part about developing cameras at GoPro is the R&D. Here, GoPro's CEO, Nicholas Woodman, starts from the back of the pack to showcase the sharpness of GoPro's HD HERO camera in 1080p. Shot at Infineon Raceway, Sonoma, CA. GoPro would like to thank all of the volunteer SCCA corner workers that make racing weekends like this possible. This vid's for you!