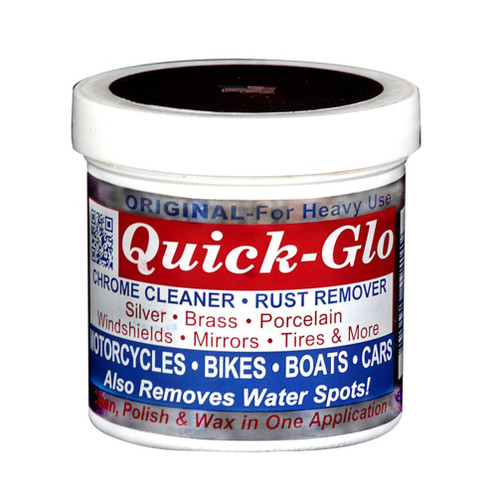 In today’s green conscious world,Quick-Glo is the superior, non-toxic; eco-friendly cleaner originally invented in 1957 as a rust remover/metal polish. My daughter Nicole and myself manufacture, by hand, every single jar to insure that the quality and performance of Quick-Glo is the same today as it was in 1957 when Ray made the very first jar in a bathtub in his garage in Chicago. The original formula works great on hard surfaces such as, chrome, brass, stainless, sinks, glass and whitewalls. It works anywhere heavy oxidation or rust is present.

Because Quick-Glo has no harmful fumes and does not require the use of gloves, it is the cleaner of choice among concerned consumers for use both in and outside the home. The Ultra Fine formula debuted with huge success at the 2010 Cruisin’ The Coast in Biloxi Mississippi. Ultra Fine over night became the overwhelming favorite of Show Car enthusiasts and Detail Shops nationwide and overseas. Because Quick-Glo is water based, with no need to break out the soap and bucket, there is no better choice for the driver-owner who needs to perform last minute touch-ups at the show to remove those stuck on bugs and road grime on their grill and chrome.

Quick-Glo’s use of pumice, instead of sand or other harsh medium used by the other companies, quickly breaks down to smaller and smaller sizes to gently allow for the polishing process during the cleaning and waxing phase. This clean, polish and wax, in a single application, is unique to Quick-Glo. The wax coating left behind, as a protective barrier, will protect the surface from future harm or oxidation for up to one year. Best of all, the consumer saves both time and money with fewer applications. In overall per application cost and application time comparisons, Quick-Glo is the stand alone WINNER.