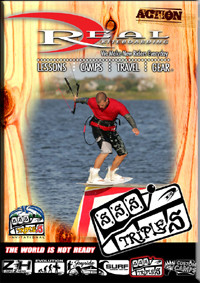 This is the fifth and final DVD in Real's instructional series, and this one is a bit different. Instead of a full-blown instructional you get the best of both worlds. On side one, if you will, you get all the crazy action that went down during this year's Real Kiteboarding Triple 'S' invitational contest. And I use the word 'contest' loosely. Instead it's more like a week-long excuse to cut loose and take kiteboarding to the next level. SSS stands for Surf, Slicks, and Sliders, with the event taking advantage of a flexible format, riding the sliders, or flat water moves in the slick, or surf sessions (with or without a kite), and even skateboarding as conditions warranted. The motto of the event became, "The world is not ready.", as the riding was off the scale. Some of this year's invitees included Andy Hurdman, Jason Slezak, Andre Phillip, Davey Blair, Greg Norman, Suzi Mai, Moehao Goold, Shannon Best, Sam Bell, Thomas Kogut, Jon Modica, Dimitri Maramenides, Aimee Rabee, and Evan Netsch. Convinced yet?